Nelson Mandela died on the 5th of December 2013 after a   lung infection disease. He was 95 years old. Nelson Mandela was an activist and a politician. He was the first black president of South Africa and he fought against apartheid for equality between blacks and whites. He wanted to free South Africa without violence, but the government started killing   protesters. He was sentenced to live in prison in a trial named Rivonia. In 1990 after nearly 27 years he left the prison.
In 1993 he won the Nobel Peace Prize for his leadership for his anti-apartheid activism. After receiving the prize he said: “We stand here today as nothing more than a representative of the millions of our people who dared to rise up against a social operation whose very essence is war, violence, racism, oppression, repression and the impoverishment of an entire people”.
Mandela’s dead has been a very bad new for human race. 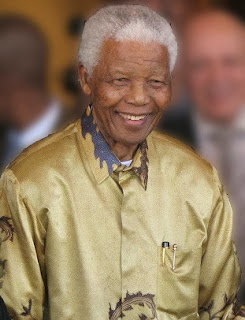 You did a great job Clàudia! Congratulations!!!!
Publicat per English a Wednesday, December 11, 2013 No comments: